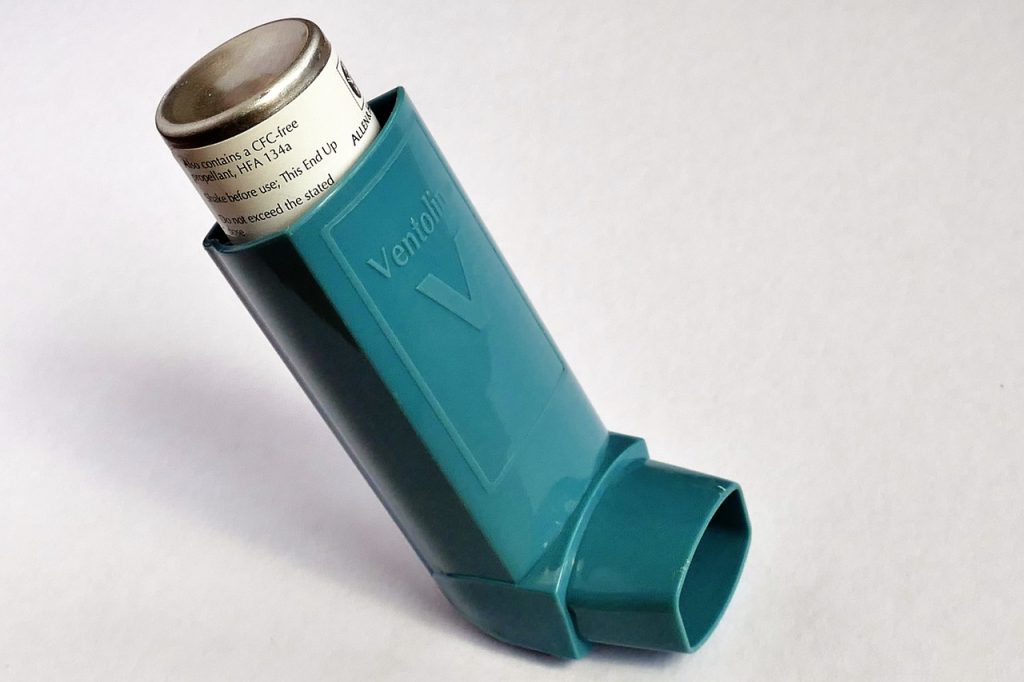 It is estimated that up to 15 million people suffer from asthma. Of those, 14.8 million are children under the age of 18. Children with asthma spend approximately 7.3 million days per year restricted to bed rest. Health care costs for asthma were estimated to be $6.2 billion, which is almost 1% of the total US health care costs. More than 5,200 Americans died from asthma in 1991. With the above statistics, we can see the seriousness of this condition, and the toll it's taking on our children's lives. If you have ever seen a child struggle to breath because of asthma, you can agree it is a frightening experience for both the child and the observer. A number of clinical studies note the effectiveness of chiropractic adjustments and positive effects for those who suffer from asthma.
Help children reduce or eliminate the need for medication, and potentially ease the severity of the asthmatic condition. Recommend a spinal exam to them.

In this country, asthma cases have increased significantly by about 60% in the last 30 years. Deaths that are related to asthma are now at 5,000 each year. Because of this rise in numbers and statistics, more and more people are seeking out natural remedies to control their symptoms. A great alternative to traditional medicine is chiropractic care.

According to research, the fast rising numbers of asthma cases has much to do with environmental variables like pollution, decreased air quality, toxins and food preservatives. Experts say that eating right, avoiding toxins, eating right and living in a clean environment can help to with the onset of symptoms, but chiropractic case has also been shown to reduce the symptoms in children and adults both.

Chiropractic is a natural and effective form of healthcare. The focus of chiropractic is to eliminate the pressure of the spine on the nervous system. Stress, trauma and toxins cause subluxations in the spine. A subluxation is a big word for misalignment of a vertebra on the spine which is then putting pressure on the nervous system. One of the major causes of subluxations, especially in kids is forward head posture. Unfortunately, today's society it seems like everyone is glued to their smartphones, TVs, video games and computers, and spend very little time being active. This, by itself changes the structure of the spine, especially in the growing spines of children.

There is a strong link between people who suffer from childhood asthma and subluxation. The misalignment that occurs with subluxation puts pressure on the nervous system leading to a variety of symptoms, including asthmatic concerns. An article published in the Journal of Vertebral Subluxation (Vol 1 No. 4) showed positive effects of chiropractic care on 81 children with asthma. Based off of this study, it shows that chiropractic care represents a safe, drug-free health care approach, that can be associated with a decrease in asthma type symptoms and attacks. The adjustment of a vertebral subluxation out of the spine could eliminate or greatly reduce the dependence on drugs and inhalers. Adjustments can greatly decrease the severity of the asthmatic condition. There was a study done in 1996 by the Michigan Chiropractic Council, a group of doctors did an assessment to conclude the effectiveness in correcting vertebral subluxation correction and asthma in children. The study was looking at the effects of chiropractic care in children from birth to the age of 17. The average age was 10 years old. This study showed many great results. First, the average number of attacks went down from 4 a month to one a month after being treated with chiropractic adjustments for 30 days. It also shows that that medications were decreased by nearly 70%. The study also found that nearly nine out of 10 of the participants were satisfied with the care that they received.

There was another study done on a 5-year old child who had be suffering from bronchial asthma for the past three years. His attacks had been becoming daily and was on increasing doses of medications that included a bronchodilator spray, Ventolin, and steroids. This child's mother was becoming more and more concerned about the number of medications that her child was consuming even though his attacks were continuing to happen daily and were not decreasing in severity. The child ended up in the hands of his mother's chiropractor. After the chiropractor did a spinal examination. Since chiropractic restores the function of the nervous system, it's always important to make sure children are being treated from a young age. While chiropractic may not eliminate the asthmatic symptoms immediately, the change will gradually occur after regular treatments.

After four weeks of treatments, his mother reported that the asthma attacks had not only becoming less intense, although they were still daily. After another two weeks of treatment, the attacks that the child had been experiencing daily, were now down to three days a week. Finally, after being treated for eight weeks, the patient visited his regular family physician. The patient's medications were reduced and his steroid medication prescription in half. Chiropractic care was continued on a weekly basis, focusing on the mid-thoracic region as well as specific cervical manipulations. After the patient was being treated with chiropractic care and adjustments for eight weeks, the asthmatic attacks were much, much more mild and only occurring every two weeks.

After four months of care, the patient re-visited his medical doctor. At this time there were major changes in his medications made. He was told that he could completely discontinue his steroid use and was now visiting his chiropractor every two weeks.

As previously mentioned, chiropractic focuses on realigning the spine which in turns gets pressure off of the nervous system. By getting the pressure off of the spinal nerves, our bodies are restored, and our functioning is at its best. The region of the spine that chiropractors focus on while treating those with asthma is the thoracic region. In our spines, the thoracic region is composed of 12 vertebrae. This region is between the cervical and lumbar regions of the spine. They are intermediate in size, while the cervical are smaller and the lumbar vertebrae are larger. The thoracic region differs because they articulate with the rib cage. They are numbered 1-12. Each of these vertebra are associated specific spinal nerves. These nerves innervate all of the organs, muscles and cells in our bodies. In specific cases in which chiropractors are treating patients with asthma, much of the focus is on the upper thoracic region. Specifically, T1 is the area of the nervous system that is responsible for the function of the lungs. Allowing us to inhale and exhale, as well as the function of the different parts of the lungs. When this nerve is irritated function can be changed. Asthma occurs when there is spasm in the bronchioles, which are the air tubes in the lungs. This is why it's so important that chiropractic care is considered as a healthcare option when someone is dealing with asthma.